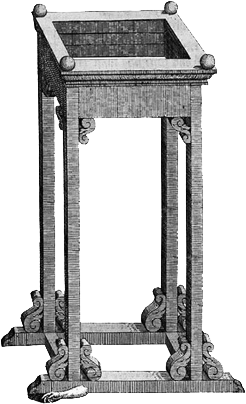 Here is a non-complete list of things worthy of note happened in the past year:

Groundwork. A series of drawings exploring the archetype of architectural foundations. With Barbara Materia, Chicago 2020.

It is not about you. An interview with Walter Benn Michaels and Bob Somol published on nonsite.org about our project A Certain Kind of Life featured at the Lisbon Architecture Triennale 2019.

Deserts: Cells for Certain Individuals. Our essay for the art journal nonsite.org opened the whole issue #31 about Architecture edited by Todd Cronan, accompanied by Walter Benn Michaels' introduction The Recluse.

Laconic Architecture. A typological investigation and a design exercise developed within the first-year graduate studio The Baths. The seminar explored the history of the notion of space rereading Alois Riegl's Late-Roman Art Industry (1901) through Luigi Moretti's Structures and Sequences of Spaces (1952); analyzing Mimar Sinan's hammams in Istanbul and the Municipal Bathhouses in New York and Chicago; and, finally, conjecturing the project of three rooms with precise spatial intentions. More here: laconicarchitecture.com

Commune. A third-year core undergraduate studio at the UIC School of Architecture (Fall 2019) exploring how we do live together in isolation. Using the paradigm of the Carthusian monastery, where the individual and the collective juxtapose without merging into an idiorrhythmic whole, the studio imagines assemblage of rooms oscillating between intimacy and confrontation, laziness and production, isolation and exposure, leisure and boredom.

Climatic Universal System. Architecture and Living Knowledge . An essay for the issue #73: 2 of the peer-reviewed Journal of Architectural Education dedicated to Work and edited by Peggy Deamer and Tsz Yan Ng.

Measure and Excess An introduction to the History and Theory of Western Architecture at the UIC School of Architecture (Fall 2019). The course focuses on a selection of architectural paradigms able to epitomize and make intelligible the conceptual ruptures, power relations and artistic volitions of crucial moments of Western architectural production. Despite their chronological organization, the ambition of such a series is to provide a broad framework for the comprehension of architecture at different levels, creating a mental constellation of references, analogies and differences.

A Project of Distance. Paper presented at the Distance Looks Back Symposium, hosted by the European Architectural History Network and The Society of Architectural Historians, Australia and New Zealand and organized by Andrew Leach and Lee Stickells.

Rooms for Thought Workshop and Symposium at the A. Alfred Taubman College of Architecture and Urban Planning at the University of Michigan, within the UN-WORKING lecture series organized by Brittany Utting and Daniel Jacobs. (Ann Arbor, Fall 2019)

One Rusty Iron Heart First-year core graduate studio at UIC School of Architecture. Moving from Diego Rivera’s Detroit Industry mural, the studio investigates the evolution of industrial architecture in Chicago, often considered as the monotonous yet indispensable counterpart to the glamorous skyscrapers of the Loop. Moving from the national efforts to reinvigorate the "industrial commons," the studio devised strategies for strengthening the historical and vital manufacturing sector of the city, critically tackling the current reconversion of its industrial corridors (PMD) into innovative and creative districts.

A Double-Headed Monster. OMU’s project for the Rotterdam AIR Competition, 1982. A chapter in the volume Aesthetic and Politics of Logistics, edited by Taneha Bacchin, Hamed Khosravi, and Filippo Lafleur, and published by Humboldt Books.

The Architecture of Logistics Together with Negar Sanaan Bensi, I edited the issue no. 23 of Footprint, the Delft Architecture Theory peer-reviewed journal, to provide a critical survey of the architecture of logistics, unfolding the multivalences of its apparatus, dissecting its buildings and spaces, its technologies and labor relations, its historical evolution as well as its future projections. Contributions by George Papam Papamattheakis, Clare Lyster, Francesco Sebregondi, Stephen Ramos, Giulia Scotto, Carola Hein, Nancy Couling, Jesse LeCavalier, Neeraj Bhatia, Alex Retegan, Renzo Sgolacchia, Marcello Tavone, Kathy Velikov, David Salomon, Cathryn Dwyre, and Chris Perry. You can read it here.

∆
I am an architect and Assistant Professor at the School of Architecture of the University of Illinois at Chicago. While teaching design studios and theory seminars at The Berlage Institute, TU Delft, the Rotterdam Academy of Architecture, and the RomaTre University, I earned a PhD in History and Theory of Architecture from the Delft University of Technology. I am part of the research collective The City as a Project, I cofounded Matteo Mannini Architects and the think-tank platform Behemoth Press, and I worked with the Office for Metropolitan Architecture and DOGMA. Some of my projects have been exhibited in international venues such as the Venice Biennale (2006, 2014, 2016), the Oslo Triennale (2016), and the Lisbon Triennale (2019). I regularly write for architectural magazines and academic journals (Log, Volume, OASE, San Rocco, Domus, Flat-Out, Counter-Signals), and I am part of the editorial board of the Journal of Architecture Education. I recently coedited The Architecture of Logistics (2018), coauthored Tehran: Life within Walls (2018), and contributed to the volumes Work, Body, Leisure (2018), and Aesthetics and Poetics of Logistics (2019).

> and here a few images.