At the apogee of the great depression, between July 1932 and March 1933, the Mexican artist Diego Rivera completes the Detroit Industry mural in the court of the Detroit Institute of the Arts. Juxtaposing cosmological themes to machinery, a primordial fetus to crystals and raw minerals, ancestral divinities to electric power plants and steam pumps, Rivera celebrates the collective nature of labor and the emancipative alliance of heavy industry, science, and technology when at the service of the many rather than for the profit of the few.

After having studied the Ford works in Detroit and Dearborn for months, Rivera illustrates the factory as the most ambitious monument ever created by men: the tangible expression of the ingenuity and industriousness proper of the human species that defines its endless becoming. Such a generic capacity to produce reverberates through the frantic movements and the actions each worker. Industriousness propagates as undulatory energy across the 27 panels of the composition, as singular material expressions of the same collective labor-power connecting biological implantations to planetary explorations, agricultural tools to pharmaceutical laboratories, furnaces and steel machines to military equipment.

The mural explains how the assembly-line transformed the factory into a system of relations extending beyond the spatial limitation of its walls and machines, from the extraction to the transportation of raw materials, from the assemblage to the distribution of final products, from the supply chain at a global scale to the microscopic orchestration of single actions across the manufacturing floor. The industrial technology defined a new way of rationally organizing the world and making use of its hidden resources or, as Heidegger would say, of enframing. The factory was no longer just a building but a territorial concatenation of multiple activities: an index of the productive forces of a whole territory.

The homogenizing rhythm of the assembly-line turned the factory into a logistic system tying together bodies and machines, lands and sources of energy, measured gestures, cities and forms of life but also behaviors and social constructions, images, and subjectivities. Inherited from the meat-processing in Cincinnati and Chicago, and even before from the standardization of firearms, the assembly line was first tested at the Ford Highland Park Plant in Detroit between 1912 and 1914 and ultimately refined at the River Rouge Plant in Dearborn, where Henry Ford and Albert Kahn devised the broadest industrial complex of the time: a whole self-sustaining assembly-line-city.

Moving from Diego Rivera’s mural, the studio investigates the glorious evolution of industrial architecture in Chicago, developed in the shadow of the glamorous skyscrapers of the Loop and often considered as its monotonous yet indispensable counterpart. Chicago would not have been Chicago without its grain elevators and railway networks, its lumberyards and warehouses, its stockyards and steelyards, its tools and furniture makers, its printing rows and textile manufactures, its electronic and pharmaceutical labs, its wholesale stores and merchandise marts, its elevated trains and logistic underbelly. The studio will map this entrepreneurial energy tracing back the economic accelerations and arresting points of Chicago’s history of production through a selection of paradigmatic industrial buildings, creating an atlas of forms and typologies useful for conjecturing future interventions.

Considering the current effort to reinvigorate the "industrial commons" at a national scale, the projects would have to devise strategies for strengthening and support the vital manufacturing sector of Chicago, especially in relation with the boosting high-tech, electronic, robotic, chemical and pharmaceutical research and development industries. At the same time, the studio will tackle the critical local debate about the conversion of the industrial corridors (PMD) into innovation and creative districts – as occurring for Goose Island, Lincoln Yards, or Fulton Market – meditating on the political role of architecture in valorizing the general intellect, the labor force, the spirit of the city and the collective resources of the whole metropolitan area.

The first phase of the studio will survey some of the past and future tendencies of the Chicago manufacturing sector, trying to understand the spaces, activities, and infrastructures that transformed a remote frontier outpost into the bursting driving force of the whole Midwest. Learning from Rivera’s fresco in Detroit and the Chicago muralist movement, the first part of the studio will culminate in the construction of a collective wall-drawing representing the various aspects of the Chicago Industry, correlating architecture, socio-political events, and contextual conditions into a unique, stratified image: a mural.

The second phase will produce a series of projects integrating, improving, and extending existing a series of abandoned industrial buildings in the city. Taking into account the formal repertoire of the past, while speculating on the present and future architecture of work, the studio will devise strategies for recovering and accelerating the industrial heritage of Chicago: a pounding “rusty iron heart” – as Algren once sang – “that holds both the hustler and the square.” 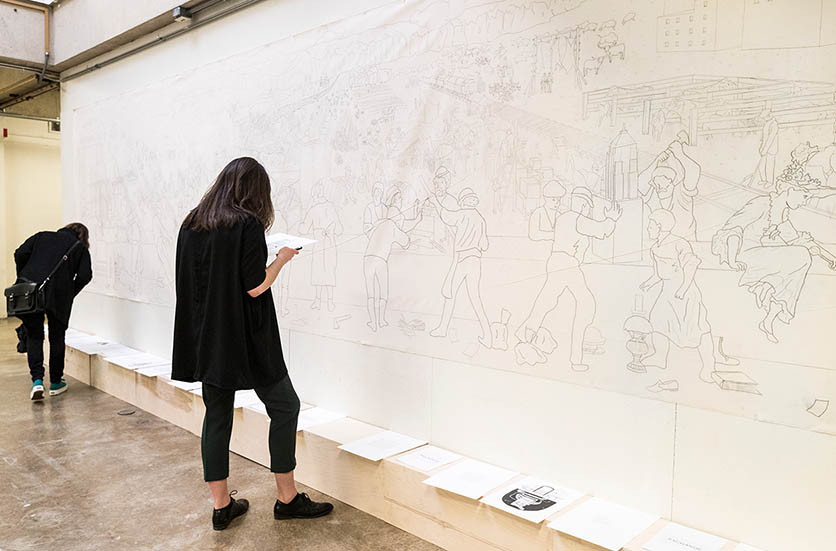